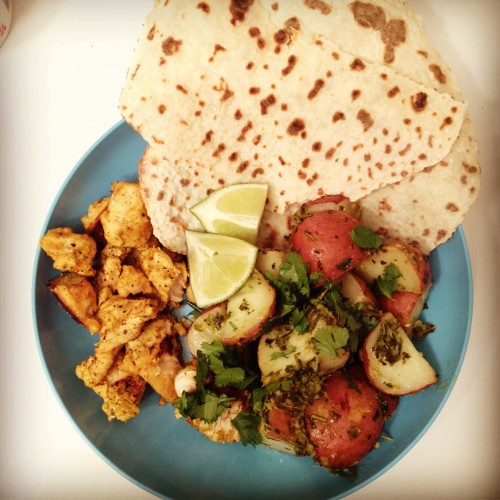 As I was saying in my last post, I had the lefse flatbread with tandoori chicken (as a wrap) which began this informal two-part recipe.

Well, I’m back with the tandoori-esque chicken. Esque because tandoori style refers to the cookware used and I just don’t have a tandoor. We’ll call this something like yogurt-spiced chicken instead (ok so it was named already at Chocolate Shavings-where the recipe was found).

Marinating meat in a yogurt-based concoction results in something wonderful. Every. time. Juicy, tender and flavorful. The spice combination and grated ginger….it just doesn’t get any better than that.

I’m always slightly fearful when I find a recipe based on a number of spices because I’ve found that a bad combination will ruin your day. You can be all “yay, I’m going to have a delicious Indian/Chinese/(fill in the blank) meal until you taste it and know something is missing or there’s way too much of something. It can be hard to get just right and once you’ve had an amazing herb/spice blended meal, it’s hard to accept a taste less than that level of awesome. If something is absent in the dish, I rack my brain trying to improve it and find out what was missing or what was not necessary. Greg and I are getting pretty good at that task.

This dish gets it right. I only added fennel seeds-not really needed but I find that it adds a little somethin somethin to an otherwise a-ok combo. I also marinated it for 4 hours in place of the 2 the original called for (nothing too big). My cooking method wasn’t directly on the oven rack so my method varies to the original. The lime, cilantro and sour cream on top are musts. A splash of lime is just one of those little additions that is often that missing ingredient. 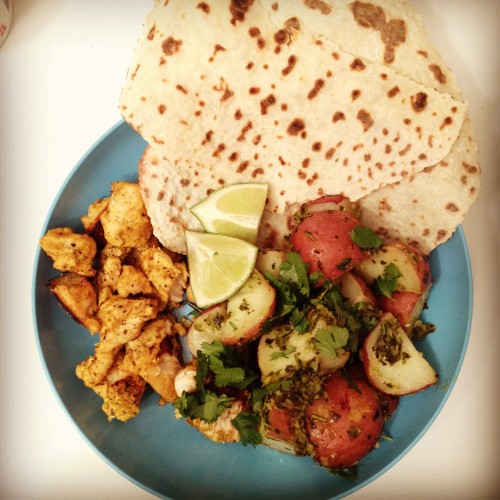 Toast the seeds in a pan (without oil) and toss until fragrant. Then grind the spices until you obtain a powder. Mix the yogurt, spices, ginger, garlic, curry, salt and pepper in a bowl. Cut the chicken breasts into bite size cubes and add to the yogurt mixture. Toss to coat all the pieces, cover with plastic wrap and marinate for 2 to 4 hours. I did 4.

Serve with the lefse or warmed naan bread, a dollop of sour cream, a good drizzle of fresh lime juice and garnish with the cilantro.

One thought on “Yogurt-Spiced Chicken”