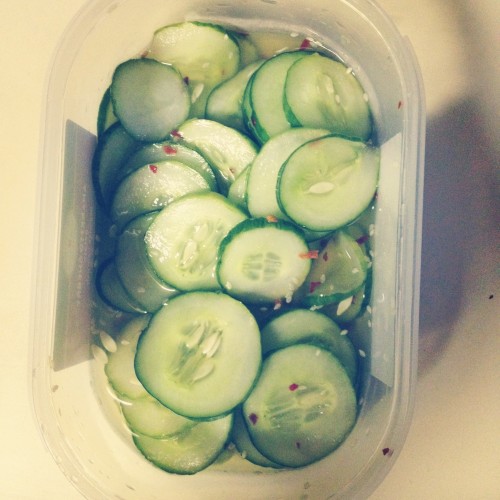 Stop the presses! We had a simple, blow your mind side dish last night that I wish to share while cukes-cucumbers to some-are in season. Not just in season but at the peak of perfection. Isn’t that in a commercial or something? And yes, I know using “stop the presses” makes no sense in this context.

One thing that made this recipe even better was that the cuke was free. A sample from one of our new favorite vendors at our local farmers market. She’s kind, talkative and always has ideas for preparing the veggies. I forget her name but she rocks. She and her husband are from Thailand and we talk produce. They are going to have some sort of blue garlic that will end up in my hands…can’t wait.

Have I ever mentioned that, at best, cucumbers were a 4 out of 10 (10 being love love love)? Yeah, I’m an idiot. Even with all the great recipes I’ve made in the past with the gourd. Spicy chicken with rhubarb-cucumber salsa. Creamy dill cucumber salad. Tzatziki sauce. 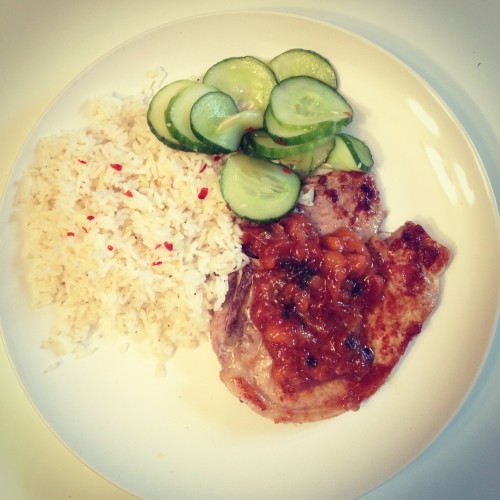 This was dinner last night.  Pork chops with bourbon-peach-sage sauce and rice (with the salad juices poured over the top) and yes, it was amazing.

Old ways of thinking die hard sometimes. But I’m giving them way more credit after this recipe. It involves 7 ingredients. Some you have, I’m sure. The others…rice wine vinegar, mirin (sweet Japanese cooking wine), and sesame seeds…maybe not. But I would grab these from the shelf at the grocery store. They are there.

Using substitutes, for once, I don’t suggest. There’s something about the combination of mirin and rice wine vinegar that I don’t think can be reproduced and with them being the major flavors in this dish, I wouldn’t chance it. (I’ve made other vinegar/cuke salads before but this one was different-the others were good but this was better.)

FYI: Some people draw some of the water from the cucumbers beforehand by adding salt and allowing them to sit for 15 minutes or so but I didn’t. I didn’t want to complicate this one. Ok, so I’m lazy. 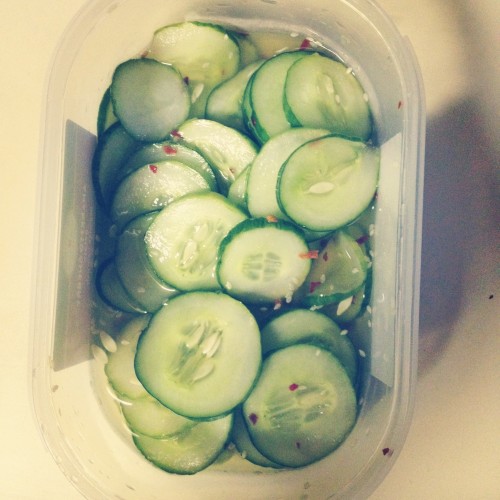 Ingredients:
2 small-ish cucumbers ( English variety work but it’s your choice), thinly sliced
2 tsp salt (or to your taste)
1/4 cup rice wine vinegar
palm full of sugar
1 tbsp mirin
pinch of red pepper flakes
about a tbsp of sesame seeds (you can toast these if you want and add them before serving)

Place the thinly sliced cucumbers in a bowl, add the other ingredients, stir, cover and refrigerate for at least an hour but two is better then munch away. See how simple that was?

5 thoughts on “Cool as an Asian Cucumber Salad”