After more than a week-long break from posting, I’m ready to get back into the writing saddle. The Thanksgiving meal, that I spent making in my tiny kitchen for most of the day, turned out delicious. There were some mishaps and by mishaps I mean some recipes didn’t come out so great probably because I didn’t try them before which merits a doh à la Homer Simpson to myself.

I fixed the potato dish after attempting to understand the creator’s directions just to give up after my face crinkled to the extent that sweat began on my brow. I decided to make my own version, a tasty gratin side. I was prepared for the other mishap: the stuffing recipe. I was disappointed that my solution was a store-bought Trader Joe’s mix…which was ideal but I had my heart set on homemade. Next year is my year for homemade stuffing!

The brined turkey was moist and wonderful just as I was told it would be by other bloggers and friends. We didn’t have as many leftovers as we would’ve liked from our 13 lb. bird but we are making due since we love the leftover creation meals just as much as the actual Thanksgiving feast. 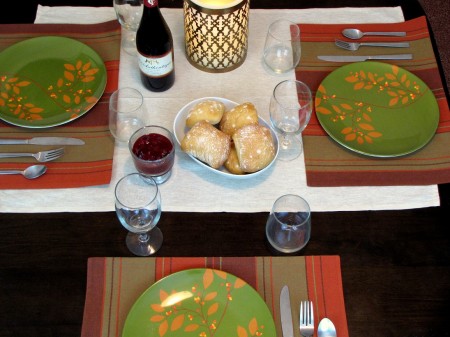 Our friend’s stay was the taste of home much needed for our break and was a warm-up for our Christmas visit back home coming in a little more than 3 weeks. I can’t say that we did much of anything but that’s pretty much the point of a “staycation” and what we did was valuable for our friendship. Thanks for coming, Jason! (Also, thank you for telling us about your lady friend. I can’t wait to meet her.)

Our one year anniversary came and went although we both agreed that we’ve spent over 7 years together and that it didn’t feel like merely a year. We had the ceremony last year so that some family and friends would “get off our backs” (that expression seems harsh but is pretty much the sentiment) as we felt that we were meant to be and no amount of money or ceremonial act was needed to tell us that fact. Again, we’re not very traditional. 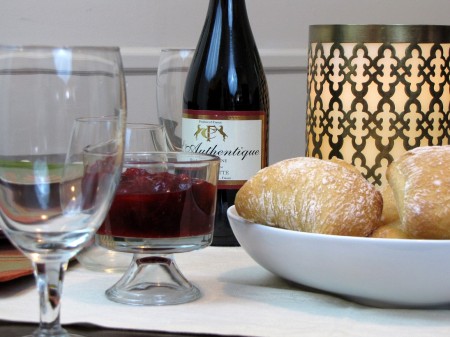 Overall, a lovely time was had away from the daily grind and strangely, I’m still craving turkey. I might buy another this week to try a few more leftover recipes that I’ve come across. Here are the ones I’m most interested in:

Martha Stewart has been a go-to for my Thanksgiving leftovers for a few years and the recipe I’m providing today comes from her but here’s a link for another goodie: Thanksgiving-Leftovers Shepherd’s Pie

There are many from epicurious.com, here is my choice: Turkey & Blue Cheese Salad with Tarragon-Mustard Vinaigrette 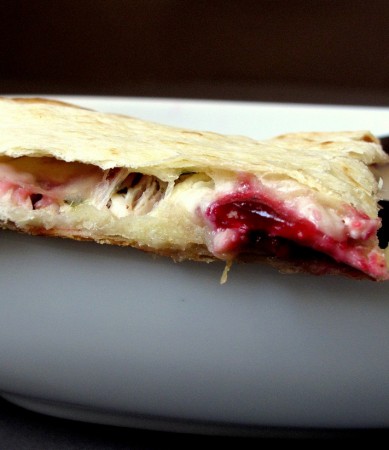 Quesadillas with Cranberry Sauce and Brie by Martha Stewart
Serves 2

Preheat the oven to 425 and brush one side of the 2 tortillas with olive oil, placing that side face down on a baking sheet. Then, spread 2 tortillas with 1 tablespoon of mustard. Divide the turkey over the 2 and add cranberry sauce (about 2 tablespoons per quesadilla). I changed the recipe to use my sauce instead of her chutney and I added some heat with hot peppers. Layer the 2 with brie slices, optional cilantro and sprinkle with salt and pepper. Add the second tortilla to the top of each, make sure the olive oil is brushed over this top as well. Bake, rotating the sheets halfway through until the cheese has melted and tortillas are golden brown, 10 to 15 minutes. Let cool before slicing and serve topped with more chutney if you wish.

Place all ingredients in a saucepan and bring to a boil over medium heat. Reduce to low-medium and simmer for 10 minutes, stirring occasionally. The berries will pop and it will be runny until it cools slightly and becomes thicker. Refrigerate until serving.