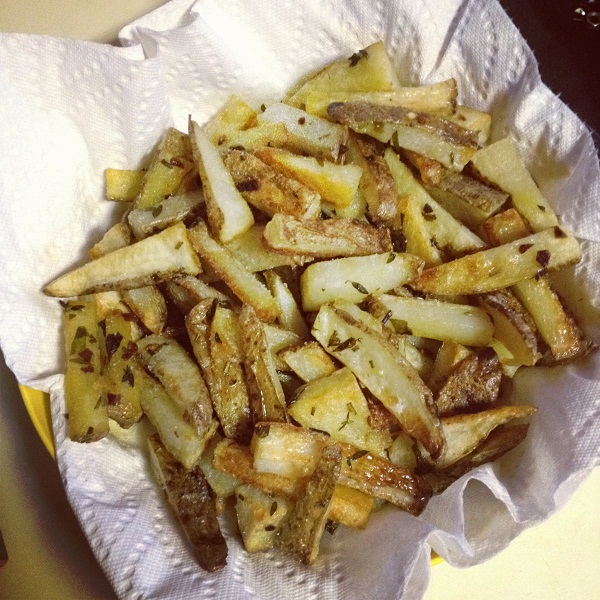 1. We will talk about oven fries.

2. We WILL talk about oven fries. (They are delicious when done right and this is a great way to make them crisp.)

3. If someone says “stop” or goes limp, taps out while you’re trying to explain how much better this method is, it is over. Let them go on with their less than wonderful recipe.

4. Only two oils to my recipe. (I enjoy olive and peanut oil but peanut is preferred…ok sometimes canola.) 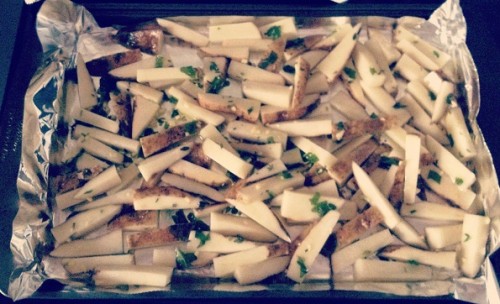 6. No shirts, no shoes…around that oil and you will regret it.

7. The talking about the recipe will go on as long as necessary until you or someone else understands how effective this method is.

8. If this is your first encounter with the recipe/method, you HAVE to try it.

(Obviously I’m doing a parody of the movie Fight Club.) 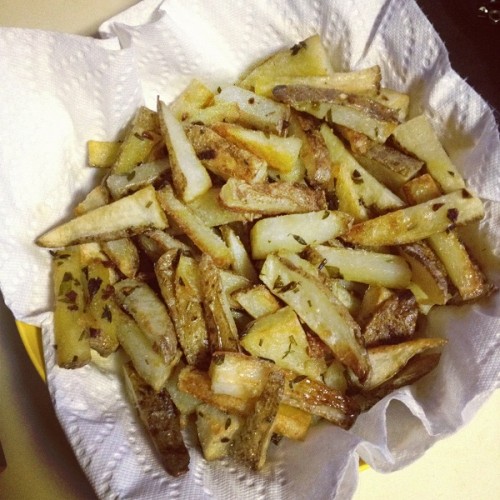 Oven fries the way they should be made

Serves 4 (ok maybe 1 or 2)
Ingredients:
4 potatoes, preferably Yukon Gold or Russet
2 to 3 tbsp peanut oil (or olive or canola oil but peanut is my choice)
add some fresh herbs if you’d like, chopped-optional (I also added garlic but later, during roasting so it wouldn’t burn.)
coarse salt and freshly ground pepper

Preheat the oven to 425F. Cut the potatoes into thick slices lengthwise (keep the skin on) and set in a bowl of cold water. This is the step many people don’t do and it makes a huge difference. It removes the starch on the outside of the potato and allows them to get nice and crisp. Leave them in, I’d say, at least an hour if not a few.

Next step is also important-dry these babies well, very well with paper towels. Place them in a bowl with the oil (depends on how big your potatoes were for the amount of oil but be sure each one is coated but not overly coated). Don’t add the salt before they are cooked. That’s a finishing step here and one I hadn’t learned til later in life. Spread the potatoes in a single layer on a roasting pan (I like to place a sheet of aluminum foil on my pan) and sprinkle herbs over top the potatoes…if you are adding them.

Bake for 35 to 40 minutes, turning halfway through cooking. They should be brown and crisp and the cooking time will vary. Remove from the oven and dump in a paper towel-lined bowl then sprinkle with salt and pepper. Serve immediately. Spread the word about oven fry club. And mind the hot oil.

One thought on “Rules of Oven Fry Club”