Let’s sweeten this day up with a bundt cake. If you’ve ever seen My Big Fat Greek Wedding, you might say it as I do and if you have no idea what I am talking about, look at the picture of this chocolate bundt with a sweet walnut filling. Oooooh!

Well, it was tasty but did not come out clean which is why my picture is kind of odd. I thought the cake might be dry so I found a filling to add with walnuts, brown sugar and butter. This was tasty and pecans could be used instead of walnuts or no filling at all. I think something raspberry inside would compliment the dark chocolate, maybe next time. This bundt was adapted from an Ellie Krieger recipe that was supposed to include espresso but I didn’t have any. 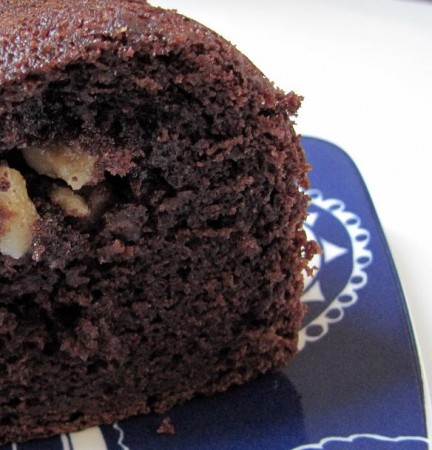 Preheat oven to 350 and spray bundt pan really well if you don’t want to have what I had in the end, it had separation issues.

Whisk in a bowl the flour, cocoa, salt, baking powder and soda and then sift into another bowl. In another bowl, whisk melted butter and oil, and then add eggs and egg whites. Fold in yogurt (or sour cream), vanilla extract and sugar. Melt the chocolate in the microwave in 30 second intervals, stirring after each interval. Fold it into the batter. Add dry ingredients and stir until combined, don’t over-stir the mix. Mix the melted butter, walnut and brown sugar together. Pour half of the batter into the pan and place the walnut layer on top of the batter and then top it with the remaining batter.

Bake 35-45 minutes, until a toothpick comes out clean. Cool on wire rack in the pan for 15 minutes and then, flip it over on the rack. If it doesn’t come out, run a knife around the sides to help release. Remember, it still tastes great if it doesn’t come out clean and that it will work next time….that’s what I told myself. Top with the powder sugar by dusting it around if you wish.