The sun is shining! It’s 3 degrees outside right now! Why am I using exclamation points?! That’s pretty cold. When it was near 40, it was gloomy. Whatever.

You know what makes my morning better, besides a large mug of coffee? Puppies. The Today Show had a segment about the top 10 breeds which put me in a cuteness coma. I sat there staring with an awkward expression on my face that equates to joy, rarely seen by other humans beyond Greg. I stop bitching when I see puppies and begin to think about how great it will be when I have a few and by a few, I mean at least 4 and then more when we obtain some acres…in Oregon. I think life would be much better with a dog, even though we finally have furniture I like, no more college hodgepodge. Maybe we should go back to foldout camping chairs…we had those for over 6 months last year. We also slept on an air mattress for over 6 months. Don’t feel bad, that made us stronger and we know “what we’re made of” and all that crap that people tell themselves when they are struggling. We had some memorable times. I’ll just do what some grandparents have known to do for decades…cover it in plastic so when you go to sit down, you slide right on out to the floor (or stick to it) and when you’re sweaty, it makes a nice puddle with lots of squeaky fun. That’s the ticket.

I had every intention of talking about something else but oh the puppy longing! (Seriously, exclamation again.) If I could have puppies instead of children, like have a litter, I would. However, when you think about the logistics of that, it’s gross but I want it to be like in the old movies, where people don’t think about things like that and just accept that it could happen (and crazy antics ensue). I hope people know that I am kidding. Emphasis on KIDDING.

After the hot chocolate pudding cake with ice cream that I posted yesterday, I thought going a healthier route would be best. I’m talking about pan-browned Brussels sprouts from Gourmet. I thought the recipe called for too many pine nuts with the amount of sprouts, also too much butter and olive oil so I reduced those in the recipe below. Only 8 ounces of sprouts were stated but I used 12 ounces of frozen and it still seemed too much. Add a sprinkle of Parmesan over the top if you wish-another addition of mine and these are scrumptious. 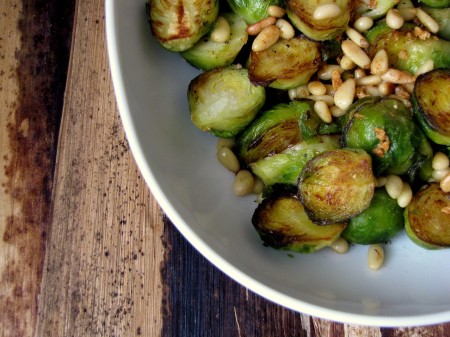 Trim fresh sprouts and halve fresh of frozen lengthwise. (Remove any excess water on frozen by wiping with a cloth or paper towel.) In a skillet, melt ½ tbsp of butter and the olive oil over medium heat.

Arrange the sprouts, cut side down, in one layer, in the skillet. Sprinkle with salt and cook, without turning, until crisp and brown on the bottom, about 15 to 20 minutes. Transfer the sprouts to a serving dish.

Add the remaining ½ tbsp of butter to the skillet, over low heat, with the garlic and pine nuts. Toast the pine nuts and garlic for a minute or two, until pale golden and sprinkle over the top of the sprouts. Add some pepper and (optional) Parmesan. 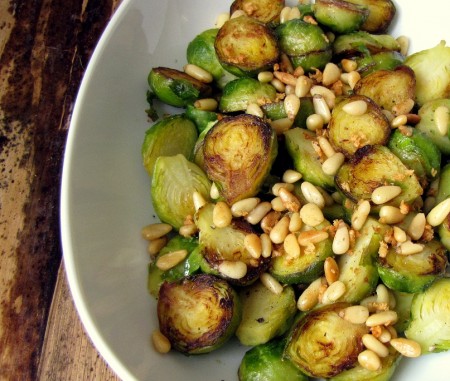 13 thoughts on “I Would Not Give My Puppy These Pan-Browned Brussels Sprouts (Yum!)”