We celebrated our one year anniversary this weekend. Technically it’s not until the 24th but as I said before, our friend will be visiting for Thanksgiving. We are anxiously awaiting his arrival Saturday the 21st. (We can’t wait, Jason!) Again, I will not be posting but definitely eating (and drinking but that’s between you and me.)

Thanksgiving is around the corner, preparations have been made, time off is scheduled and life feels better since I know this break is fast approaching. I will be busy cooking but that is enjoyable. Sure I say that now but after my refrigerator is full of things to bake, we’ll see. This is a much needed break by both Greg and I, probably our friend Jason too. (Probably you as well.)

As I was saying, anniversary weekend involved our favorite Indian dishes that lasted two whole days, movies and a walkabout in the arboretum. (Greg spit me to him…our messed up version of the quote from the movie Australia…walkabout…nevermind.) We watched Say Anything, Can’t Buy Me Love, Back To the Future (both Part 1 and 2), Dan In Real Life and Blazing Saddles. I loved it; we had our laughs, made some new inside jokes (without trying) and spent some quality time together. I love you, Greg. I am so glad we chose one another to share the ups and downs of life. You are wonderful and I am so happy to be this stupid in love with you.

Speaking of Indian, how about some butter chicken? That’s what I will call this even though it’s somewhat different than any other recipe for butter chicken that I’ve come across. Make it as spicy or mild as you want by leaving out or putting less cayenne pepper in the dish. If you are not a fan of chickpeas, add diced potatoes when you add the butter and spices. 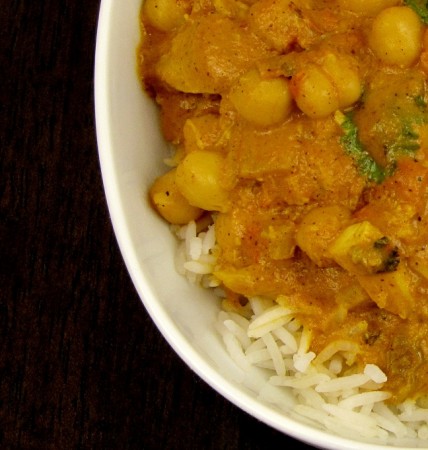 Prepare rice as directed and set aside.

Heat large sauté pan over medium and add the oil, chicken pieces and salt/pepper. Cook until no longer pink and juices run clear and then stir in butter, onion, garlic, cinnamon, cayenne, cumin, curry, garam masala, turmeric and coriander, cook for a few minutes. Then, add chickpeas and tomatoes, turn the heat up slightly, stir and cook for 5 or so minutes. Then, stir in heavy cream or half & half, coconut milk, and optional tomato juice and allow to blend for a few more minutes. (I usually bring it to a slight boil at this point and turn it down once it has bubbled for a minute.) Toss in raisins, highly recommended, and simmer until they are plumped over medium heat. Serve over rice topped with cilantro and plain yogurt.

* Make it as spicy or mild as you want by leaving out or putting less cayenne pepper. If you are not a fan of chickpeas, add diced potatoes when you add the butter and spices.