We’re feeling the burn of ChaLean Extreme. Stairs and other daily functions only become this difficult to do when I perform strenuous physical activity or drink too much (don’t judge, it’s not a regular occurrence). We have two circuits to do this weekend. It hurts so good already. Are you doing a new or continued workout? How’s that going?

I’ve been meaning to mention that our landlords (hey Kiffi and Victor) offered Greg (my 25 year old husband for any new readers) the opportunity to help on the weekends doing a few projects. I was told that a “tea place” could be going in below our apartment. Those words are from Greg and I don’t know what that means-a store or café or maybe I’m wrong and it’s for golf. Whatever it may be, it’s excellent, can’t wait!

Greg is particularly happy that he will have a project. He’s one of those weird guys that want to remodel or build a table in his free time. I love that about him. People don’t understand the kind of person he is and always want to morph his character into something he’s not. I’ve said it before and I’m about to say it once more-he’s an old soul in a young body. Then again, his ideas are more modern/forward thinking in design so he is also a young soul but mixed with the knowledge of an old soul. I know for sure he’s a smartass and he knows the same of me.

The last thing I want to mention is how my heart goes out to those in need and those helping the people of Haiti. (Sure my heart goes out but how is that helping?) That population has been in dire distress for quite some time and I can’t fathom what it’s going to take to provide a stable platform for Haitians to stand and rebuild (well rebuild with help since it is the poorest country in the western hemisphere) but I only see reason to be optimistic in this situation. I hear they are resilient people and considering the prior conditions, believe that wholeheartedly. The Daily Beast provides a list better than I could compile for donation and aid (not relating to the corrupt government there) so click that link if you are interested in helping.

Greg’s company gave the employees a turkey in December and I made this bird Sunday, following Bon Appetit’s herb-roasted turkey with shallot pan gravy (yum). You don’t have to make another turkey. I know Thanksgiving wasn’t so long ago but I wanted more turkey dang it. Instead, buy a chicken or turkey at the store and make this turkey and sweet potato hash from Martha Stewart. Breakfast for dinner is common in our apartment but have this any time.

I love hash (hashy hash hash), which tends to consist of potatoes, onions and some type of meat, usually beef but this dish uses turkey. I might love hash today but when I was young, a babysitter fed us straight out of the can, still can-shaped in the bowl, not heated, dog food-looking hash lunch. Fittingly, I often put it in the dog’s food bowl. (She also made us eat room temp corn dogs which still make me sick today.) Needless to say, I did not have an affinity for the stuff until my in-law’s served it for breakfast, in a much more desirable fashion. I can’t get enough now but I need to because it’s very high in calories.

Place the potatoes in a medium saucepan, cover with cold water and bring to a boil. Reduce the heat; simmer until just tender, about 7 minutes. Drain and set aside. Heat 3 tbsp of butter in a large non-stick skillet over medium heat. Add the apple and cook until golden, about 11 minutes. Transfer to a plate and set aside.

Add the remaining 2 tbsp of butter, onion and celery to skillet; cook until slightly softened, 9 to 10 minutes. Add the wine and cook until the liquid has almost evaporated. Add the turkey, potatoes, cream and stock, simmer until the sauce is creamy and the vegetables are tender, about 12 minutes. Stir in the sage and apple; season with salt and pepper. Spoon mix onto buttered toast and drizzle with sauce. (I added cranberry sauce to the toast and skipped placing the hash on the toast.) 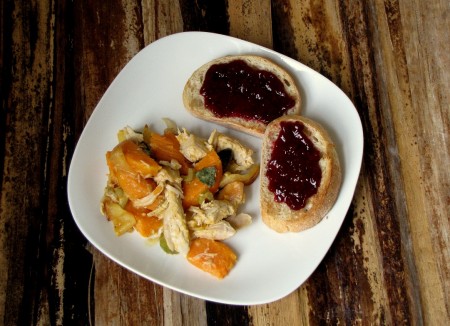