On December 29th and 30th, Greg and I (and a few friends) drove a few hours from our hometowns to West Lafayette/Lafayette, Indiana-Purdue University land. Our friend Ethan was kind enough to drive and board us so that we could reminisce. The initial plan was a bar crawl but we felt that our sleep deprived selves and lack of a large group wouldn’t allow for such a big feat (I had 22 stops listed). Stop number one had to be one of our favorite small breweries ever, Lafayette Brewing Company, which I talk about quite a bit (and don’t care).

There are hundreds of memories for us in this friendly, quintessential (by my standards) restaurant/brewery. Not only is the price, atmosphere, music events and food renowned here, it’s pretty obvious that they must be onto something as they’ve ranked second in World Beer Championships, ranked number one in numerous local music contests, host beer tasting events for brewers around the country and rank first in Indiana beer competitions. Don’t expect to find their beer in any other state or area beyond Lafayette, Indiana as they’ve just begun bottling to local stores. I wish they would expand but there’s something about keeping it within the area that makes us want to return time and again.

You can have your pick of 7 or 8 beers at any given time, made on the premises, not including any seasonal brews and every weekend involves live music (that I remember). We were there on a day that the upstairs level wasn’t open (I nearly cried) but that was often where we could be found, next to the pool tables, with a few friends, chatting with Kate the bartender and recognizing nearly every other person that walked up the attractive staircase. I’ve heard they had to take out the dart board but that nothing else has been changed. They still serve pizza upstairs: pulled pork, Thai and a variety of other styles that made Thursday nights wonderful a few years back. When you’re brew crew you can get quite a few deals.

A meal that I crave, a salad at that, resides here and has made my mouth water with just a mere word from the title: Black & Bleu Caesar Steak Salad (pictured below). The steak is prepared as requested with just the perfect amount of salted seasoning and the bleu cheese seems to be one of amazing quality, put that with croutons and a zesty Caesar dressing (oh and lettuce) and you can bet I am sitting happy. I’m not even one to order salad and this one has me to my knees.

Their menu has changed a bit but I can suggest at least 4 other tasty meals if you ever make it there. Be sure to order cheesy potato munchers to start and an East Side Bitter (my beer of choice most days), then sit back and relax.

Down the block was our next stop: Knickerbockers, Indiana’s oldest saloon. We were once told that their bloody marys reigned supreme and that has been the only drink we’ve ordered the last few times we’ve been to that establishment. There has only been one other that compares to this drink and that is at Club Soda in Fort Wayne (we didn’t make it there on purpose because dining on their second level patio is great in warm weather). We had nice conversation (and an issue over our charge but it happens) and moved across the street and down a block to Chumleys. I’ve talked about this pub before in the early times of my blog here. I took a picture of the beer menu, which consists of 50 on tap and over 100 bottles, but the lighting was off so I decided to nix that photo.

I chose to finish the night with a German wheat (Hefeweizen) while Greg enjoyed a dry martini. As always, it took more than a few minutes to decide what to get and the server was probably aggravated but used to it. We walked over the pedestrian bridge that connects Lafayette with West Lafayette towards our friend’s apartment (very chilly) and the “ice polisher” must’ve been out (Purdue is known to polish the snow to ice for students) as the sidewalks were covered in the all too familiar slick substance. I fell asleep at 2:30AM to a foodnetwork show and a nice chat with Ethan.

The next day, we went to campus and took some pics, very few-it was cold people and it was vacation so no one was out, plus they were doing construction and demolition on campus. We did make it to the new Neil Armstrong building, the “school of Aeronautics and Astronautics, School of Materials Engineering, Department of Engineering Education, and several engineering programs, including the Minority Engineering Program, Women in Engineering Program and Engineering Projects in Community Service, or EPICS,” quoted from the school’s page. What an impressive structure and program. When you walk in there’s a replica of the Apollo 1 re-entry vehicle and a little further across the way, a moon rock and other memorabilia. (Neil Armstrong, Amelia Earhart and “Sully” Sullenberger are among some of the alumni.)

As mentioned before, we had Captain Gyros for lunch, which was memorable but not as good as King Gyros in Fort Wayne (I do not repeat myself, I do not repeat myself for any Daria fans). Most of the area is the same, we’ve only been absent a few years, but one of our cherished coffee houses is now a vegan restaurant and the other coffee bar is now a second Spurlocks which is another memorable pub and fine by us. After the Captain, we headed towards the opposite side of campus (across the street) to the wood products building (pictured below). Greg and I spent a lot of time in this building (wood club President and member although I was a PSY major) and it didn’t seem different beyond the new CNC router in the lab. Greg talked with an old professor, that he did research with, then we walked toward the newer Pao art building. We miss these places.

We didn’t make it to the infamous Harrys, the Neon Cactus or Jakes although initially they were on the list/closed that day. Plus, those places were more frat/sorority hangouts that are/were not quite us. We were more the type of people that wanted to drink good beer on the Lafayette side with conversation and a better atmosphere. Harrys (Chocolate Shop) did have some good bar food though and I did enjoy lunch there time and again, when the place didn’t have people basically standing on one another. I also had a few bartender/bouncer friends that enticed me to come out to the frat/sorority hangouts on the West Lafayette (campus) side occasionally so I had a well-rounded experience. Did I mention that my GPA was decent and that I was not a “party person”? I didn’t want to give a different impression.

The majority of places that have changed seem to have only done so in name. For instance, we noticed that some bars have the same vibe but a new name and the same type of patron and some things seem to remain the same by changing all the time. All in all, a great trip that we hope to make again in the summer, when we might be home again.

Greg and I even began seriously discussing moving back but jobs are lacking, especially in our fields (although I could blog easily). Plus, I already have scars from a past job that spans the entire county and that I’m sure would come back to bite me in the ass if I moved back. (I don’t want to talk about it.)

Now to the dessert I made randomly this week. I guess not too random because it has been in my mind to make a dark chocolate cake/torte with rich ganache and a side of sweet marsala dark cherries since having that same thing at Shorewoods in Fridley, MN. The version I came across is not comparable to that treat. They were both good but not quite in the same category so I have yet to find the dark torte I’m craving. Don’t get me wrong, this Bon Appetit dark flourless cake was delicious in its own right and the cherries (my own creation) were a nice complement. I made the same cherries to go alongside some baked brie for the holidays and think they were a hit. Don’t let this cake intimidate you, it’s easier than it sounds, so give it a go and indulge.

Preheat the oven to 350 and butter a 10-inch springform pan. Line the bottom of the pan with parchment and butter the parchment. Wrap a layer of foil around the outside of the pan, bringing foil to the top of the rim.
Combine 1 cup of water and sugar in a small saucepan and bring to a boil over medium heat, stirring until sugar dissolves. Simmer 5 minutes then remove from heat.

Melt the butter in a large saucepan over low heat, then add the chocolate and whisk until smooth. Whisk sugar syrup into chocolate; cool slightly. Add the eggs to the chocolate mix and whisk until well blended. Then, pour the batter into the prepared pan. Place the cake pan in a large roasting pan and add enough hot water to the roasting pan to come halfway up the sides of the cake pan.

Bake the cake until the center no longer moves when the pan is gently shaken, about 50 minutes. Remove from the water bath and transfer to a rack. Cool completely in pan.

Ganache: Bring whipping cream to a simmer in a small saucepan over medium heat. Remove from the heat and add the chocolate, whisk until smooth. Pour over the top of the cake still in the pan. Gently shake the pan to distribute the ganache evenly over the top of the cake. Refrigerate the cake in the pan until the ganache is set, about 2 hours.
Run a knife around the pan sides to loosen the cake; release sides. Cut cake into wedges and serve with sweet marsala cherries.

Combine the sugar, water, lemon juice, cinnamon stick and sweet marsala in a saucepan and bring to a boil. Reduce the heat to medium and add the cherries, simmer until thickened slightly, mashing some of the cherries. Remove form the heat and remove the cinnamon stick. Allow to cool and then place in a jar. 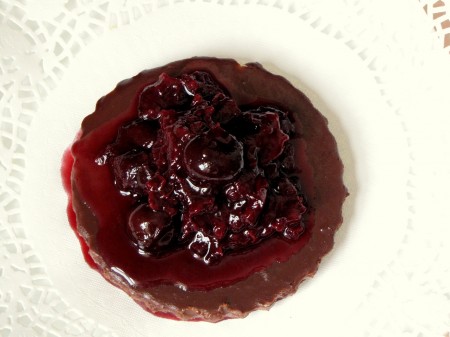 4 thoughts on “Beer, the Past, Purdue University and Dark Chocolate Torte Cake with Cherries”