A lady could get used to these kinds of weekends: wonderful birthday party Friday, driving around with ice cream and no particular place to go Saturday followed by a relaxing night in with hubby and hitting the trails, looking for blackberries, with a light drizzle most of the moseying to cool us down, Sunday. We were looky-loos gawking at the beautiful homes around town, ducking under the large trees along the sidewalk for relief from the few times when it began to pour. Deep sigh.

This makes me wonder what next weekend will hold-4th of July weekend. We have some invites but are not making plans until later this week. Greg and I know we can’t take a trip anywhere so why fret? With the new friends, that feel like people we’ve known for years (love that), it could be one fun 4th of July. We have yet to see any shows in Minnesota. We don’t know where to go nearby.

Last year, we didn’t really see fireworks but had a good time in the woods with friends. The year before, we were traveling home from Greg’s 10 day “trial job” in Charlotte (NC), stopping in a town by the Ohio River that was supposed to have a big show but instead had a “rain out” without any fireworks…and the town (can’t remember its name in southern Ohio) was actually kind of scary. Disappointing. The entire trip was fraught with disappointment when, at the end, Greg was offered the position but the pay wouldn’t have covered half of our bills and who knows if my degree would’ve held value there. A month later we were looking for an apartment here in Northfield, Minnesota.

Back home in Indiana, a state without as many firework regulations as Minnesota, we would either go to the town 20 minutes from my hometown (where I attended highschool) for a big show that was shot at 2 locations or in my hometown at the ballpark (not too far from the launch site).

The ballpark allowed you to lie on a blanket and see the display directly above with your whale corn…that’s another story. In the other town, you could sit in the back of a vehicle, on a blanket or with lawn chairs, surrounded by family and friends in a parking lot or grassy area, gathered hours before. Some people parked a car the day before to save a spot. The adults/kids had sparklers and various other fireworks that would entertain the nearby crowd before the big show and it would take hours to leave because of the amount of spectators. Food was everywhere and people were kind enough to share when supplies were short. 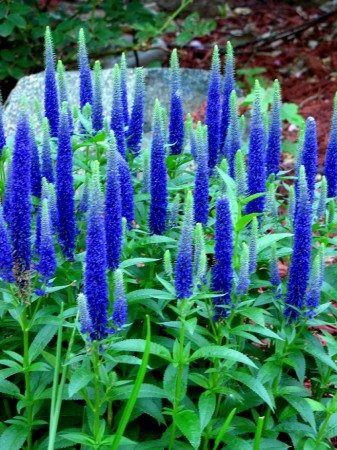 As a child, we would venture down the road, from our country home, and get to see 3 or 4 neighboring city’s firework displays. With the open fields and gently rolling (small) hills, we could see the biggest city’s show, Fort Wayne, behind our house. (We lived along the county line.) Of course, we could see our hometown show (Roanoke), then Columbia City and a few more firing the bright, beautiful bursts of pyrotechnics. I remember sitting in the back of the truck with snacks, sometimes a breeze, my sisters and parents. There might have been a few others tossed in, like grandma and grandpa/aunts and uncles.

I wasn’t big on loud noises back then. Sadly, I brought headphones to most shows as a child-parades included. I’m over it. From our back patio, you could see, miles and miles away, the fireworks but still chase lightning bugs around the yard and fields. My dad would put on his own show and we’d fall asleep happy.

One year, as a teen, we came back from the hometown show and a large number of my friends came over. We had a firework war. Good times. Did you know that if you tape a large amount of sparklers together (sparkler bomb), secure them well enough to shoot them towards the sky, and then proceed to run like hell, it makes a much more interesting pop? You can imagine more than a few didn’t make it towards the sky and required spectators to run. Fun, I don’t think anyone was ever seriously hurt. Another year, as a twenty-something, I was trapped behind a tree with 2 others because my friend thought it would be funny to toss numerous fireworks into the bonfire. Nothing too big but I remember running as if I were about to die and saw a bottle rocket fly an inch away from my ear. Nice one, Brant!

Our front yard was covered with bottle rockets from a few people shooting them at one another…don’t recommend that but it was fun to watch. My old Eagle Summit, one of the tiny rare cars and my every day vehicle from highschool through college, was pelted with bottle rockets as were many of my friends’ cars when the holiday rolled around. We all had vehicles out of their “charming state.” Good old Eagle, I say that now. Greg had a humongous old diesel Suburban with barn doors in the back. You could hear that monstrous SUV miles away in college when the muffler was no longer functioning. Greg just laughed. I was a little embarrassed but I laugh now.

Sorry for the length of this post, I was on a memory roll. No worries, I have a quick summer dessert from Martha Stewart-baked apricots with almond topping. To be honest, I wasn’t impressed when I found it but I had all of the ingredients. I was prepared for an “ehh” reaction but I was so wrong. You might have all the ingredients and I suggest you make this soon. The butter, brown sugar and almond topping would be perfect with a scoop of ice cream on the side but it’s not necessary. Don’t let this recipe fool you, the apricots were soft and warm, seeming to melt in my mouth. I’m making these again this week. Bring out the grill for this one if you wish. 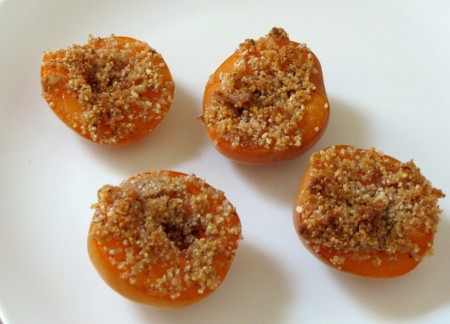 Ingredients:
4 ½ tsp butter, softened
¼ cup almonds
3 tbsp brown sugar
6 apricots, halved and pitted (I left the skin on but you can remove it)

Preheat the oven to 400F. Butter an oven-safe dish. In a food processor, finely chop the almonds and brown sugar. Add the softened butter until just combined. Place the apricot halves in the dish, cut sides up and top with the almond mixture. Bake until soft and mixture is golden brown, 15 to 20 minutes. Serve warm. Ice cream would be great on the side.