The day has come to go north for camping! I think we have everything, and then some, for the weekend. We will be leaving around noon, after meeting friends to head that way for 4 or so hours. (That way being Eveleth, Minnesota.) To make things even better, my new issue of Gourmet magazine came in the mail. (I miss Domino magazine, anyone feel me?) A few days ago I received Food & Wine, which had an article that described so accurately my thoughts and the very words I have spoken about Eugene, Oregon. The novelist Chang-rae Lee wrote a piece called ‘Understanding Oregon Pinot Noir Country’ and about living in Willamette Valley. This touched my heart and gave me added fuel to my motivational fire to get there and settle in. I recommend reading the article.

We have a sad history with Eugene though. We were to move there and prepared/awaited word for 6 months from a man that hired Greg-it was go, no go, and go again, and then no go. This jackass in Eugene hired Greg in November of 2007 and then jerked us around until May 2008, when Greg could no longer deal with his lies and bipolar behavior (and his son’s actions since it was a father/son business). The man flew Greg out a second time to work on a project in May, had a fit over something Greg had nothing to do with and told Greg to wait for his call to talk about things. Then the man never contacted Greg again.

Actually, he abandoned him in Oregon without transportation or lodging, leaving my husband to find a way home to Indiana. I admit, I have thoughts of revenge and believe he could possibly be the worst person I’ve ever encountered in my life. He runs a business (last we knew 3 people comprised his business) in Eugene and Portland (the Pearl District-where Greg was to be head of that branch). His first name is the same as my husbands, he told us he was building a house in Mexico and he “rubs elbows” with politicians and heads of Nike, so beware. I happen to have knowledge about some sneaky, perhaps even illegal, operations he was conducting and still may be.

Even with all that baggage, we want to be there. The scenery, weather, hiking, lifestyle, craft beer, wineries, farmer’s markets, schools and on and on just call our names. I think camping would be amazing. Perhaps we’ll do that when we vacation there hopefully in less than a year. We intend to fly into Portland, venture to some microbreweries and wineries, swing over to Eugene and back to Portland. I am trying to figure out how to do this on the cheap. Suggestions?

Back to camping: I made a snack for the gang. This one is a classic camping recipe- “puppy chow” with chocolate and peanut butter (from the side of the Chex box). I don’t know why they call it puppy chow and frankly, I don’t care. I just eat it. 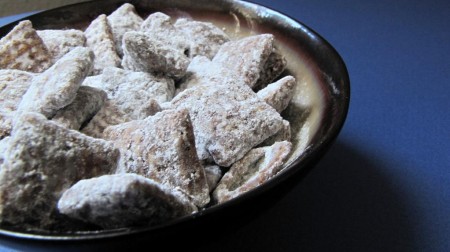 In a saucepan, over low heat, melt the butter. Then, stir in the chocolate chips and peanut butter until melted and combined. Place cereal in a large bowl and add the mix over the top, toss until all pieces are coated. Place the mix into a zip-lock bag and add powdered sugar, shake well until all pieces are coated. Place on a baking sheet to cool in the refrigerator. When cool, place in an airtight container. I would store it there until you were ready to eat. This won’t last long. Maybe make double.

Have a great weekend!