Reality is back. I was smacked this morning with a student loan company taking out a double payment…which they’ve done before (not sure why or how) and were rather rude to deal with by not crediting me the following month or returning the money. I’m out an extra couple of hundred bucks this holiday season (after spending quite a bit being home). Hooray!

I’m going to go back to a happy place, a recent happy place. My mom is making what is called a “crazy quilt” for me with patches of several fabrics. While I was home, I went out twice to pick out the fabric and she whipped up a sample that looked great. She is very talented (she wouldn’t say so) with crafting (and many other things)-sewing, quilting, crocheting, knitting and on and on so I am excited to see how this turns out.

One of the best parts of being home was shopping with the family. My parent’s Outback, or rather the front passenger seat, wanted me to lie in the lap of the person behind me. It doesn’t fail! The seatbelt becomes wrapped behind the handle to recline; I turn a certain way and the next thing I know I’m looking up at someone in a rather uncomfortable position while everyone laughs. I can’t tell you how often this happens. There’s just enough time to forget about it in-between visits and drives in their Subaru that I don’t learn. I bet some might count on this incident and await the moment where Annie reclines without warning. This time the seatbelt wouldn’t release the handle and required my husband to get out and fiddle with the mechanism because I couldn’t put on the seatbelt…he wasn’t as amused as my mom and sister.

One day, we ate at Moe’s Southwest Grill, which doesn’t exist in this state (they catered our reception). I crave the queso and salsa verde. Please send me some! The second shopping day with family involved a stop by King Gyros (which has been remodeled since the new baseball field went in across the street). If you’ve read any of my past posts, you might have noticed how much I love this place and how crazy I am for a good gyro. I wasn’t disappointed. However, while visiting Purdue, we went to Captain Gyros in West Lafayette, “the warm-up one” I called it since the sandwich wasn’t as good as the King. I’ll talk a smidge about the Purdue visit later. 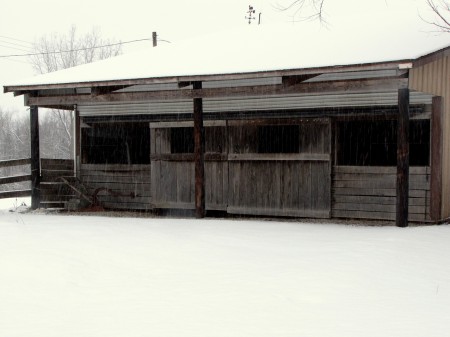 Another happy thought was playing aggravation with my grandpa, cousin and husband. We had a championship playoff and my husband won again. I’m pretty sure I’ve mentioned this before but there’s a hat involved and it goes to the winner until the next playoff which obviously belongs to Greg this year. He cheated! (I’m a sore loser when it comes to this beloved marble game.) My grandma also told me her secrets to my favorite meal she makes-chicken and noodles and I can’t wait to perfect that recipe. Thanks, grandma!

Before we left, we had lunch with my grandparents. My parent’s brought my grandma’s favorite pizza (and one of my top 3) from Oley’s in Fort Wayne. I was lucky enough to live 10 minutes from this family admired pizza joint growing up. Oley’s makes a deep dish style with a large layer of cheese (take care not to choke). Large men have been full from one piece. We also picked up a thin Pizza King pizza (Royal Feast) which we’ve ordered ever since I can remember. These pizza places don’t exist in Minnesota. I haven’t had a pizza like these in any state actually. If you can’t tell, we ate like tomorrow didn’t exist.

Both my parents and grandparents had a puzzle on their table while we were home so of course, we attempted to help and had such a fun time. We watched home movies at the in-law’s house and had a blast watching all 5 of the kids growing up, as well as, the past pets, relatives and friends of the family showing up sans grey hair and wrinkles. Most of us swear that Greg’s dad doesn’t age but it could be that he has had grey/silver hair since his twenties. I saw Greg’s youngest brother as a preemie in the hospital, which brought out the waterworks. He has come a long way and we are all proud of him. Well, almost all of the family- the new Australian Shepherd Sydney tried to bite him (may have succeeded) and most members of the family (Greg almost lost part of his cheek), although she doesn’t leave my mom-in-law’s side. She will learn.

Speaking of dogs, I saw my sister’s German Shepherd Roxie and gave her some love, along with the in-law’s older German shepherd, Josey who recently lost her son, Buck. I can’t forget Daisy, a terrier that I have a history with and utter love for and then, there are all the cats- Sophie, Izzy, Lucky, Spooky, Nuprin, Woody and Hobbes. I love all the pets.

Before we left, my dad made us delicious pancakes early Saturday morning. We hugged our goodbyes as we had done the day before with Greg’s side. Both were tough to do, especially not knowing when we’ll see them next.

I should probably get to the recipe about now. I would say it’s worth the wait: chicken and pepper stew with olives from Real Simple’s most recent issue. This is one of those impeccable recipes for the cold weather and oh so deliciously fragrant. You could add capers and more of your favorite herbs but it’s perfect the way it was provided.

In a bowl, combine the flour, 1 tsp salt, ½ tsp pepper and paprika. Add the chicken and toss to coat.

In a large pot (Dutch oven), heat 1 tbsp of oil over medium heat and brown chicken in batches, about 6 to 8 minutes. Transfer to a plate and set aside. Add the peppers, garlic, ½ cup broth, ½ tsp salt and ¼ tsp pepper to the pot. Cook and scrape browned bits from the bottom of the pot, 4 to 6 minutes. Add the olives, raisins and remaining 1 ½ cups broth and bring to a boil. Place the chicken in the pot and simmer, covered, for 15 minutes. Uncover and simmer until the chicken is completely cooked and the sauce is slightly thickened, 15 to 20 minutes. * Make the rice as directed 20 minutes before the stew is complete. 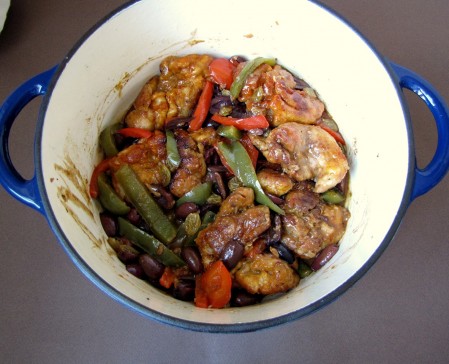