The heat is on (oh-wo-ho, oh-wo-ho)…what a horrible song. Anyway, the heat is on but I don’t feel it in here. I don’t know why. Right now, at 9AM in southern Minnesota, it is 48 degrees. I think it’s about the same in the apartment. The “reports” state that it should be 10-15 degrees warmer this time of the year. Don’t get me wrong, I am still enjoying the cool weather but I prefer to not sit in 3 layers inside my home, know what I mean? I’m waiting for the hiss and bubbling noises of the radiator to let me know that I can take off a few layers-cue stripper music. Make it that old time stripper music when knees were scandalous, now that’s the stuff. Much of today’s music leaves nothing to the imagination and that’s not sexy, nor music.

Speaking of sexy, I made Hungarian pot roast over the weekend in my slow cooker with a sour cream and paprika sauce. Ok, so it’s not that sexy but was pretty satisfying for the taste buds. This recipe was provided by Kalyn at Kalyn’s Kitchen but I had to substitute a few things due to not having particular types of paprika-make it work people. 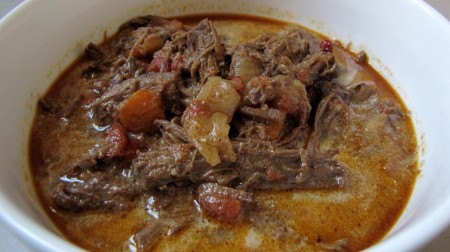 Rub roast with seasoning salt and heat 2 tsp of oil in frying pan. Add roast and brown all the sides and then place in the slow cooker. Add a little more oil to the pan and cook the onion, carrots and paprika until lightly browned. Add those to the slow cooker.

Add broth to the frying pan to deglaze and reduce slightly. Drain red peppers and cut into slices, if not already done, then add to the slow cooker with the tomatoes. Pour the broth over the top in the slow cooker and add pepper. Cook on high for 3 to 4 hours. I would check at 3 and shred the meat, add it back in and cook another hour. Then strain the liquid, once cooled a bit, and add to the frying pan again over medium/high heat to reduce slightly and whisk in sour cream. Pour this over the meat and vegetables and cook for another 20-30 minutes and then set to warm until served. This would be excellent with egg noodles or rice. Watch the amount of salt, mine came out a little too salty but I enjoy salt so it wasn’t a problem.